An alignment of Jupiter, Saturn and Pluto will take place at 23 Capricorn, mainly from January through March 2020, but it will be effective in the last degrees of this sign throughout the year. It is an unprecedented astrological aspect affecting the USA, which will also experience its first Pluto return to its natal position in the 2nd house, from 2023 onwards for three years. With Pluto return an epochal shift in the country’s status and banking structure should be expected and, in many ways, the preceding grand conjunction of 2020 will initiate a historic decade for the USA.

The economy of the USA

The grand conjunction of 2020 will happen in the 2nd house of the US astrological chart (Sibly chart: 4.07.1776, 17:10, Philadelphia) opposing the natal Mercury in the 8th, so it has primarily financial connotations. 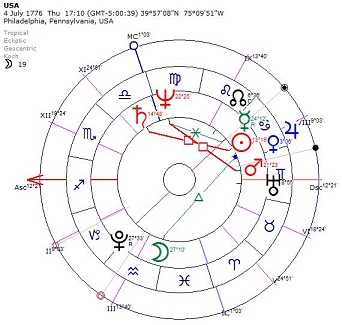 The 2nd house denotes the currency and the banking system of a country. Therefore, the dollar will be fortified and revaluated. There are many ways for this to be achieved and this prospect, in combination with a devaluation of euro due to EU’s inherent problems, will maintain the dollar’s strength.
On the opposite side, the 8th is the house of national debt and obligations. Given that the biggest part of America’s national debt is held by China, an impressive move of the American government towards the alleviation of that debt should be awaited, early in 2020, as, at the same time, this planetary alignment will hit China’s natal Jupiter (China chart, 1.10.1949, 15:16, Beijing). China will have to deal with considerable damage due to trade war and more taxation on imported Chinese products should be expected.
The USA is entering a long period of isolationism, the signs of which are already evident, but the wall which D.Trump wants to construct along the southern border is insignificant before the financial wall that will be raised against China (and the EU) after a short truce in 2019. Consequently, the devaluation of the yuan, immediate or gradual in the following years, is a strong possibility. Yet, China seems to recover and progressing briskly after 2023.

The global economy is losing its momentum. The crisis is ongoing and affects the largest economies of the eurozone: Italy vs Brussels for the 2019 budget plan and France hit by the yellow vests movement. Germany is bending under the burden of trade disputes and uncertainty due to Brexit. Eurozone is showing signs of fatigue while the ECB is preparing to formally write off the endorsement in the quantitative easing program, during which it bought assets – mainly government bonds – of 2.6 trillion euros. The Japanese economy experienced its largest contraction since 2014, with the GDP falling to 2.5%. The Chinese dragon is exhausted by the Sino-American trade dispute, with the third-quarter 2019 growth at its lowest since the beginning of the global financial crisis. The American dream tends to fade. Export markets are in trouble and consumers in the USA don’t have the spending power to come to the rescue having been hit with additional healthcare, housing, and education costs. Next year the USA chart has tr Pluto trine Neptune running till late 2020 which signifies a mood of national disorientation. Measures on financing and pollution will favor big enterprises that have easier access to loans and deeper pockets to meet higher environmental standards.
On the other side, IMF has warned developing markets for the adverse effects of the Federal Reserve’s interest rate hike. The blow will be crucial for the capital flows for countries with emerging economies such as Turkey, South Africa, Argentina, Brazil, Mexico, and Indonesia. Under the influence of the forthcoming grand planetary conjunction in 2020, this is the most probable scenario.

The first major recent export occurred in 2008 by the companies Lehman Brothers and Fannie Mae, initially through Iceland. There, the practice of capitalism to create intangible values ​​and to trade them resulted in the collapse of the Icelandic banks. When borrowers in America stopped paying the long term housing loans which they had received from the above companies, Icelandic banks that had bought the related claims arrived at the brink of bankruptcy. So the American issue of housing was transferred to Europe through an overgrown and complicated banking network. Pluto, moving through the cardinal signs and thus forming major aspects to America’s stellium (Venus, Jupiter, Mercury and the Sun on 13° Cancer) has always been significant. A brief retrospective reveals the importance of these transits:
– First square with the Sun, Pluto in Aries- 4th House (1823-1850): President Monroe’s doctrine that America ceased to be the settlement of Europe. The acquisition of Texas and the incorporation of the Midwestern states; a brave new world was emerging.
– Pluto’s conjunction in Cancer- 8th House (1914-1939): WW I in Europe resulted in the strengthening of the USA. Nowadays, references in the year 1929 are frequent because the 1929 crash had been transferred to Europe. It is worth mentioning that Fannie Mae was founded in 1938 as a New Deal project, but the success of Roosevelt’s plan is still being challenged.
– Second square, Pluto in Libra (1971-1980): the end of the gold exchange standard maintained the domination of the dollar in the global economy.
– Opposition, Pluto in Capricorn (2008-2024): The current economic crisis transferred from the center of capitalism to the periphery.

The American Federal Reserve Act signed into law by President Wilson on 23.12.1913, 18:02, Washington, D.C. brought a major restructuring of the U.S. banking system. The Act became effective on 16.11.1914, 9 am, so there are two different time points – natal charts – for the FED and it is difficult to implement them both. Nevertheless, the grand alignment of 2020 in conjunction with Jupiter of the first and prominent in the 2nd house of the 2nd chart, shows the persistent effort of D. Trump’s administration to regain control of this powerful institution that has worked for decades free of any political agenda, keeping, since the 2008 downturn, interest rates close to zero. In this effort D. Trump has international allies: recently, the European Central Bank’s president, Mario Draghi, said that he was “worried about central bank independence in the most important jurisdiction in the world.” It is evident that Mr. Trump’s precondition for the second term in office is his policy towards FED. Throughout 2020 global economy will subsist the consequences of this confrontation. Yet another crisis in the core of America’s banking system will be exported. The more so as in the USA Constitution astrological chart (17 September 1787) the central Pluto-Saturn conjunction opposes D. Trump’s Pluto-Mars in the 12th house, so it will arouse his anger and run against his need for control. Although the Federal Reserve will retain its hawkish policy, a considerable interest rate hike appears as the most probable outcome of this face-off.

The grand conjunction of 2020, in combination with essential astrological data of the USA, presages the revalorization of the dollar to the detriment of the euro and the yuan, an interest rate hike in the USA negatively affecting some of the emerging economies worldwide, and a confrontation of the incumbent President with the Federal Reserve. From 2023 onwards, with tr Pluto returning to its natal position, the banking system of the USA will be radically changed.

This site uses Akismet to reduce spam. Learn how your comment data is processed.

This site provides educational information on personal development, but you are responsible for what you do (or don’t do) with it. The publisher is not engaged in rendering professional services and will assume no liability nor responsibility to any person or entity with respect to any loss or damage related directly or indirectly to the information on this site.